We are currently open as an essential business and are continuing to serve our customers safely. Read More

Where the Furnace Pilot Light Went—And What Replaced It 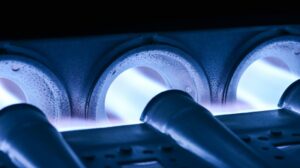 When people think of standard natural gas furnaces, they often think of the words pilot light. Standing pilot lights became part of gas furnaces back in the 1920s and marked a major improvement in using them at the time. Rather than having to manually light a furnace each time a house needed heat, people could instead turn the furnace on and the standing pilot was at the ready to ignite the gas burners.

Does the furnace you currently have in your house use a standing pilot light? We’d wager the answer is no. In fact, it’s almost certainly no if your furnace is less than eleven years old. Standing pilot lights started to disappear in the 1980s, and now you’ll mostly find them used on commercial equipment and not in residential heating systems, such as gas furnaces and stoves. What happened to the pilot light? And what has replaced it?

Pilot lights served their purpose because they were the best technology at the time. But time and technology constantly move forward, and the faults of pilot lights meant something else would supersede them in time.

Pilot lights have two major drawbacks. The first is that they waste energy. For a pilot light to provide convenience to a household, it must stay lit throughout the winter season, always ready to light the burners. However, this means the furnace is burning natural gas 24 hours a day, 7 days a week, whether the furnace needs to heat the house or not. A pilot light, on average, can burn 432,000 BTUs of energy per month, which adds up. Eliminating the pilot light is one of the reasons newer gas furnaces boast better energy efficiency.

Second, pilot lights have an annoying habit of going out and then needing to be relit. If you’ve had a furnace with a pilot light before, you’ve likely run into this problem at least once, and it’s aggravating to have to stop life to relight the furnace so your family doesn’t freeze.

Electronic Ignition Is the New Way

What started to replace standing pilot lights in the 1980s is electronic ignition systems. Rather than keep a flame burning throughout the winter, furnaces with electronic ignition only need a brief bit of electrical power to light the burners—a minuscule use of energy.

There are two types of electronic ignition systems. The less common is the intermittent pilot light. It does use a pilot light, but not a “standing” one that continues to burn for days. Instead, when there’s a request from the thermostat for heat, gas starts to flow to the pilot assembly, and then an electric spark ignites the pilot light long enough to then ignite the burners. A flame sensor then shuts off the gas to the pilot light and it goes out.

The more common type of electronic ignition system is a hot surface igniter. Here, the electrical power directly ignites the burner: electricity runs through a filament (similar to a lightbulb) so that it burns hot and ignites the gas. Then it shuts off. It’s simple, direct, and highly reliable.